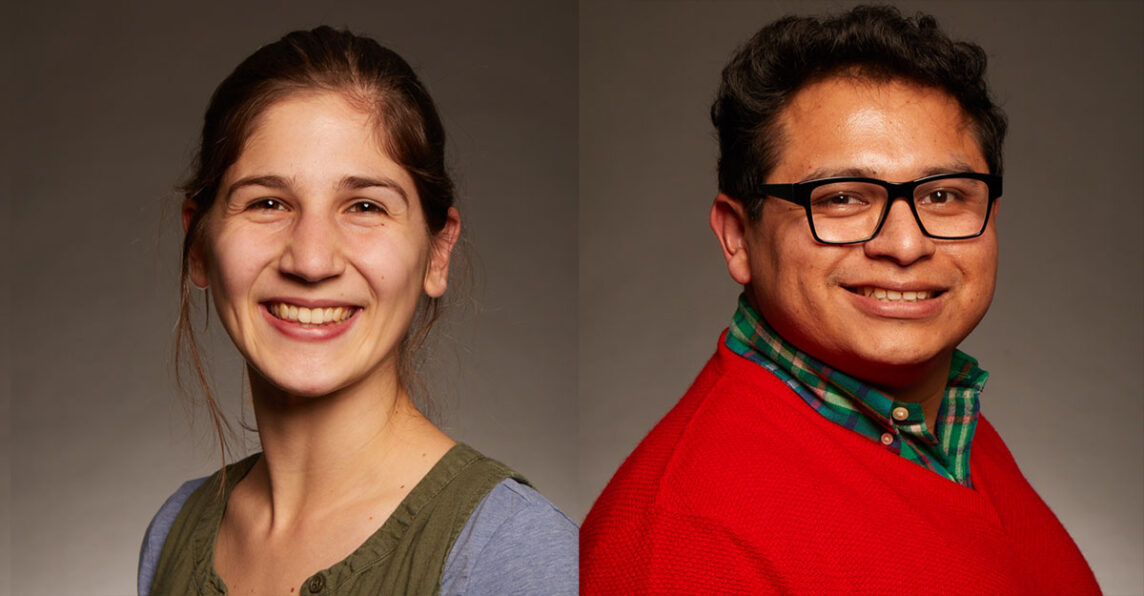 Engineers Alliance for the Arts has named Rafael Turcios and Demetra Tzamaras as the new Vice Presidents for the 2020 Student Impact Project (SIP).

Rafael has been a SIP volunteer at New Technology High School in Napa. The Student Teams from the class he taught at New Technology won First Place and Best in Show in 2018 at the Annual Bridge Showcase & Awards Event. This will be his third year participating with EAA. He has worked at RSA Civil for the last five years in Land Development. Prior to joining RSA Civil, he spent over a year in Korea teaching English, and graduated from UC Davis with a BS in Civil Engineering.

Demetra volunteered for the SIP at Sacred Heart Cathedral Preparatory in 2019 and at Immaculate Conception Academy in 2018. She works at Simpson, Gumpertz & Heger and was previously at Parsons Corporation in Washington DC. She graduated from the University of Maryland with a BS in Civil Engineering, and has a Masters from UC Berkeley in Civil and Environmental Engineering. Both Rafael and Demetra are enthusiastic supporters of the SIP and are excited to join EAA’s Board of Directors and take on the role of Vice President.

Vice Presidents oversee the annual Student Impact Project, develop scenarios, create new curriculum, and coordinate with teachers and volunteers during the 10 week program. Additionally, they orchestrate the Bridge Showcase & Awards Event, which is the culmination of the SIP in which qualified student teams present their bridge designs to a panel of judges.

Former Vice Presidents Patrick Murren and Ariel Creagh have both recently moved for new job opportunities. Patrick is relocating to North Carolina and Ariel is transfering to Degenkolb in Southern California. Their tremendous contributions to the SIP include the development of a cost-analysis extension unit and streamlined program processes. 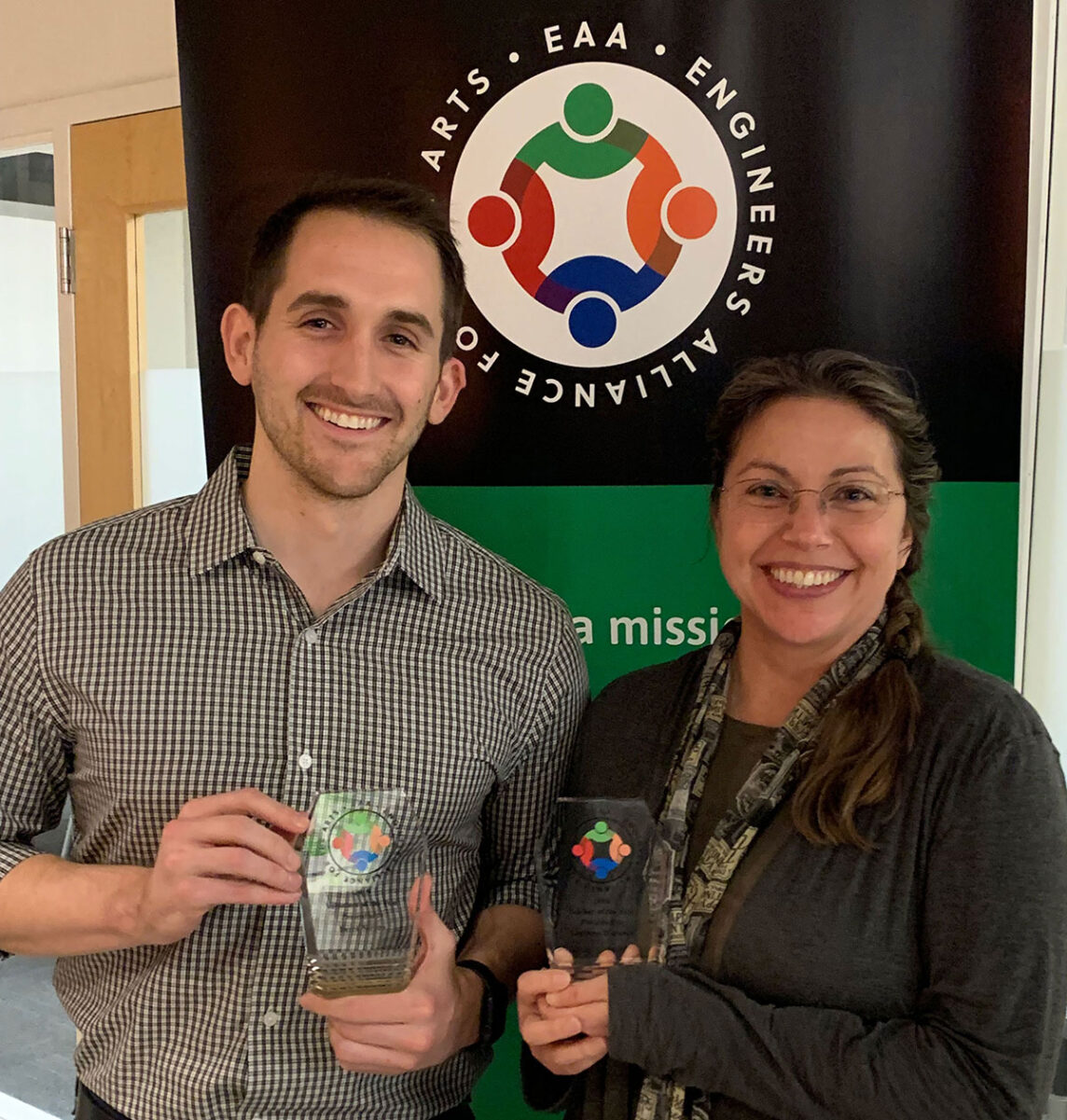 Engineers Alliance for the Arts presented their Teacher and Volunteer of the Year Awards at the Structural Engineers Association of Northern California (SEAONC) meeting in November 2019.

Derek Sereno of ZFA Structural Engineers received the William Kaplan Volunteer of the Year Award. Derek has volunteered with EAA for four years, serving as a lead instructor at Carlmont High School in Belmont. Over the years, Derek has worked with multiple classroom teachers, coordinated changing schedules, and recruited colleagues from ZFA to volunteer for the Student Impact Project (SIP). With an enthusiasm to teach and cultivate the next generation of thinkers, builders, and problem-solvers, Derek has introduced over 100 Carlmont High School Students to the engineering profession and to principles of structural design.

The 2019 Teacher of the Year Award was proudly presented to Angelene Warnock. Angelene established the Student Impact Project at New Technology High School in Napa two years ago. In her first year, she helped her students win three of the top six awards at EAA’s Annual Bridge Showcase & Awards Event, including Best in Show and First Place. Angelene created an impressive Preliminary Competition Event in which school administrators, community leaders, students and their families are invited to view bridges in a gallery setting. All participants enjoy a reception before students present their bridge designs. Bringing energy and skill to the SIP,  Angelene has become a tremendous advocate of the program.

EAA congratulates Derek and Angelene for their outstanding efforts and dedication to the Student Impact Project!

Each year, Engineers Alliance for the Arts is proud to honor individual teachers and volunteers that have made a difference in our Student Impact Project. These recipients are presented with an award and receive recognition at the fall SEAONC meeting. We applaud and congratulate all past winners of the awards.

For over a decade, William “Bill” Kaplan volunteered with the Student Impact Project and helped build EAA into the organization it is today. In memory of Bill and his personal impact on our organization, volunteers, and students, this award was created in 2011 to honor his contributions to EAA. The William S. Kaplan Volunteer of the Year Award will be presented to EAA’s most outstanding volunteer each year at the November meeting of the Structural Engineers Association of Northern California (SEAONC).

Engineers Alliance for the Arts is pleased to announce Karen Vogt-Wilcox as recipient of the 2018 Volunteer of the Year award. Karen has been volunteering with EAA for over a decade as a teacher of the Student Impact Project. The Volunteer of the Year award was presented at the November meeting of the Structural Engineers Association of Northern California (SEAONC), which was held at the headquarters of the San Francisco Bay Area Planning and Urban Research Association (SPUR).

Joseph Alter was given the Teacher of the Year Award. Joseph teaches at the San Francisco Hilltop High School and has completed two years with our program. He has been an innovator in making this program available and interesting to his students. Joseph secured funding to purchase engineering and construction-based children’s books for his students and their children to further interest in the field. Joseph’s enthusiasm for the program has lead to significant efforts and improvement by his students, even with the challenge of English as a second language. Each year, his students have won multiple honors at the Bridge Showcase and Awards Event. Joseph’s passion and enthusiasm for EAA’s programs and his students make him an excellent role model.

Patrick Murren and Keith Carames receive their Volunteer and Teacher of the Year Awards at the SEAONC meeting, presented by Jax Kneppers, President of EAA along with Laura Whitehurst and Will Kotterman, VP’s of the Student Impact Project.

EAA showed a video highlight of our Student Impact Program and also presented awards to Darrick Hom for his 3 years as Program Director, Taryn Williams for the William Kaplan Volunteer of the Year Award, and Gigi Torres for the Teacher of the Year Award. Big thanks to SEAONC for their continued support every year, and to all our sponsors who help make this program happen! 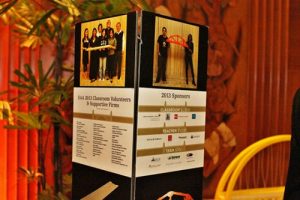 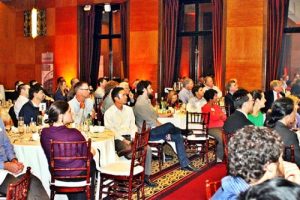 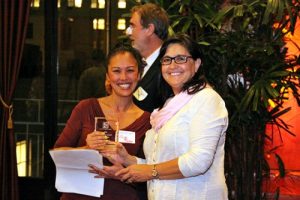 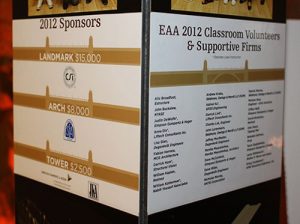 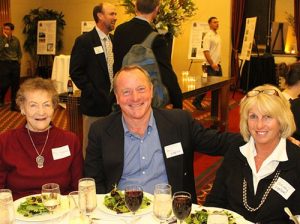 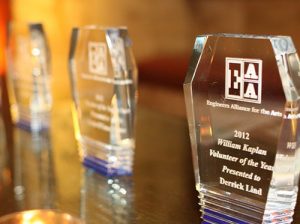 No comments by eaa

Helping students
learn how art and
engineering intersect
to construct a better
world around us.